Battling for Manassas is the story of how one site has garnered national attention and taught Americans valuable lessons about the future of historic preservation. 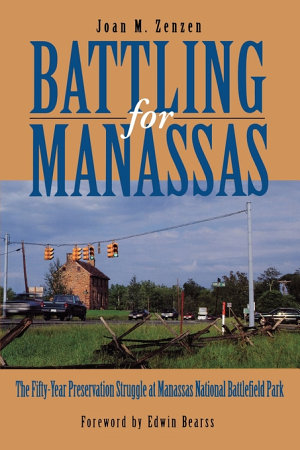 When the Disney Company ended months of controversy in 1995 by deciding against locating its historic theme park near the National Battlefield Park in Manassas, Virginia, advocates of historic preservation had won their own battle but perhaps not their war. Few places exemplify the problems of historic preservation as urgently as Manassas. The site of this Civil War battle, also known as Bull Run, has been encroached upon by plans for an interstate highway, a cemetery, a shopping mall, and two theme parks. As Washington continues its sprawl into the Virginia countryside, pressure will surely mount to develop the remaining open land surrounding the battlefield. The history of Manassas battlefield illustrates that the Disney controversy is only the latest in a long line of skirmishes over historic preservation and use. Battling for Manassas is a record of the struggles to preserve the park over the past fifty years. First commissioned as a report by the National Park Service, this book tells how park managers, government officials, preservationists, developers, and concerned citizens have managed to find compromises that would protect the site while accommodating changes in the surrounding community. Joan Zenzen's narrative places these highly publicized preservation conflicts within the framework of the park's history. She traces the efforts to preserve this Civil War battleground as it has slowly been surrounded by suburban development and discloses how issues involving visitors' facilities, recreation use of parkland, non-park-related usage, and encroachment on park boundaries by commercial interests have all come into play. Her study draws on interviews with many individuals who have been influential in the park's history&—including park service officials, members of Congress, representatives of preservation groups, developers, and local officials&—as well as on archival documents that help explain the nature of each controversy. She also shows that the Park Service's reluctance to conduct long-range planning following the controversy over Marriott's proposed Great America theme park contributed to later battles over development. Battling for Manassas is the story of how one site has garnered national attention and taught Americans valuable lessons about the future of historic preservation. It demonstrates to everyone interested in the Civil War that, with only 58 of 384 sites currently under Park Service jurisdiction, what has happened at Manassas might well occur on other historic grounds threatened by development or neglect. 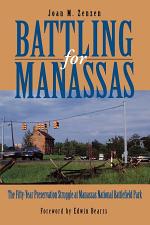 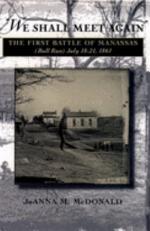 "We Shall Meet Again"

Authors: JoAnna M. McDonald
Categories: History
A noted historian illuminates all aspects of the event that launched the Civil War--the Battle of Manassas, or Bull Run. Through the diaries and letters of men involved in battle and over 200 halftone photos of the soldiers, the horrors of war are conveyed with realism and compassion. Featured are 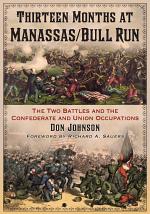 Authors: Don Johnson
Categories: History
This Civil War history focuses on Prince William County, Virginia, where two of the war's greatest engagements were fought, thirteen months apart. The First and Second Battles of Manassas are described in profound detail but so are the lives of resident families as a cloud of despair hangs over their 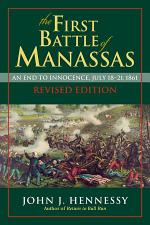 The First Battle of Manassas

Authors: John J. Hennessy
Categories: History
On July 21, 1861, near a Virginia railroad junction twenty-five miles from Washington, DC, the Union and Confederate armies clashed in the first major battle of the Civil War. This revised edition of Hennessy's classic is the premier tactical account of First Manassas/Bull Run. • Combines narrative, analysis, and interpretation 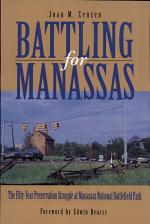